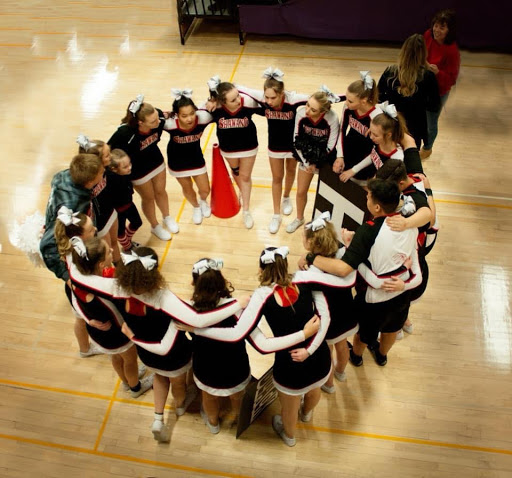 The cheerleading state competition in LaCrosse was this past weekend on February 28-March 1, and SCHS cheerleaders were preparing for their series of performances that started on Friday, March 1. Cheerleaders left after school at 5 p.m. on Thursday, February 28, and rode the bus to LaCrosse.

The cheer team adjusted their routine to make it as difficult as possible in order to score higher. The coaches and athletes often had three to four hour practices in order to fix their routine and learn it in time for state.

“We are making our stunts a lot harder,” sophomore Alexis Michonski stated, “so we can get more points for them, and we’re cleaning up everything in our dance.”

The Shawano cheer team competed against 15 other teams in their Varsity Small CoEd division and 16 teams in the Cheer Dance division. Even though there was much competition for the team, they still managed to support and encourage other cheer teams.

“It’s very energetic,” Michonski described. “Like even if you’re just watching, people in the stands go crazy even if it’s for someone that’s not a part of their team.”

When not on the mat, the team watches and cheers on other teams. The team maintained a positive attitude throughout competitions with the traditions that they have.

“We always wear pajamas on the bus there, and we always eat a lot of food!” junior Chloé Krueger exclaimed. “We always go swimming in the pool the night before, and we just dance!”

Coming off the mat after a competition can be very emotional, whether the team messes up or they hit everything. A lot of preparation goes into making sure the cheer team looks and performs their best for every performance.

“I usually wake up at like 5 a.m. or probably earlier,” senior Payten Marohl said. “I have to like straighten my hair, curl it, and do my makeup and stuff.”

The cheerleaders have a set warm up time at all competitions, and they must report to the warm up mat to get everything ready for their performance. They did a series of exercises for warm ups. They have to be sure to prepare their stunts, jumps and tumbling, as warm ups are a crucial part of competitions. 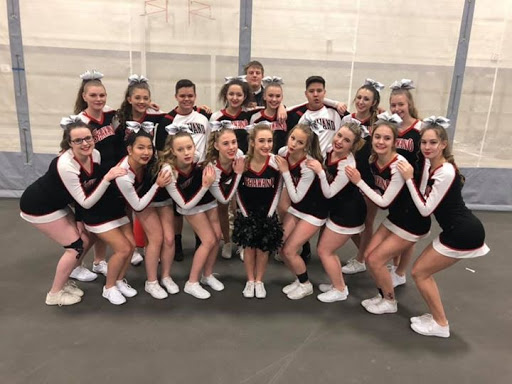 The cheer team at a competition. Photo courtesy of McKenna Kaminsky.

“We pray, and we practice out on the floor, but we normally don’t do full outs,” Krueger informed. “Full out” is a term that means the team performs their full routine with everything put into it. They put all of their effort into it, and they do not leave anything out of the performance.

With all of the hard work and preparation that went into the routine, cheerleaders wanted everything to hit. Like every competition, the nerves began to build up before stepping on the mat, but the team always has their ways to motivate everyone.

“Honestly, I used to get nervous,” Marohl explained.”But I’ve done this so long. But I do, I get some nerves, because I’m very afraid of crowds.”

The energy felt when going on the mat to perform can be very overwhelming, but it is so motivating to see other teams sitting by the mat cheering each team on. Many friendships are often formed at cheer competitions.

“We watch other teams. We just have fun, and we go out to dinner,” Krueger remarked. “We spend time as a team because it’s closing up on the season. We spend time with the seniors.”

When asked what she was most excited for about state, Michonski stated, “Definitely the bow shopping! They have a lot of bow shops that you can go to and pick out a lot of cool bows, and I love it.”

Unfortunately, all of the fun has to come to an end. State is the last chance for seniors to perform with their team in their high school cheer careers.

Marohl is sad to end her cheer career. She has been in cheer for seven years now, and she said, “I will be crying because it’s my last performance with this team.”