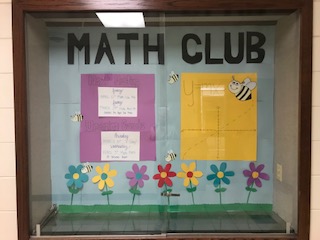 Ms. Emilie Pingel, the advisor of the Math Club, welcomes any student to join.

Math Club was established in the 1970s, and it has been growing ever since. Ms. Pingel has been the advisor since 2015, and helps with providing students with an environment for them to challenge each other while they work on a common topic of math.

According to Ms. Pingel, Math Club offers students who love math with events that include “Pi Day contests if we’re not on spring break, designing T-shirts, competing in trivia, mini-golfing and bowling against Science Society, and decorating the math pod for the holidays.”

The club also offers students the option to compete with their love and talent of math by allowing the students to be able to go to the regional tournament three times a year at UW- Stevens Point. This club helps with the love of math, but it also allows students to be a part of something.

For instance, junior Brianna Mott explained, “This is actually my first year in Math Club, and I decided to join because I wasn’t involved in school as much as I wanted to be. I was involved with sports, but I was lacking with the clubs.”

Math Club is a place for students to become involved in school activities. It also allows them to pursue something that interests the students outside of the classes they take.