Athlete of the Month: Rhain Rodenbeck 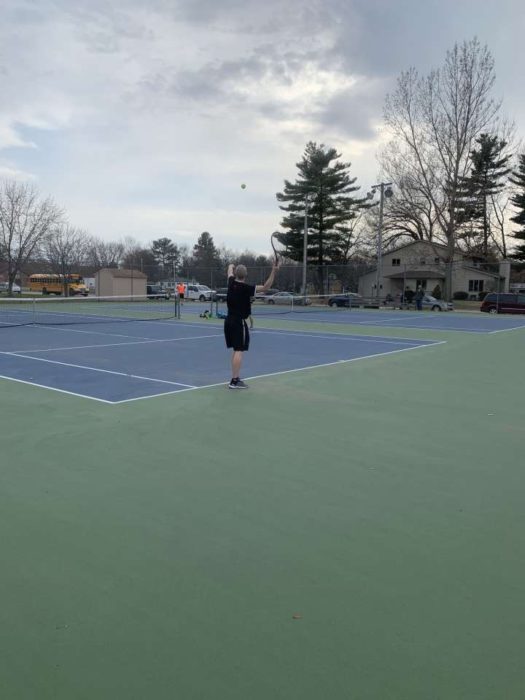 Senior Rhain Rodenbeck was diagnosed with stage three nodular lymphocyte-predominant Hodgkin’s disease last semester. Rodenbeck has recently completed his final round of chemotherapy and started to adjust back to the way his life used to be.

“Being diagnosed with cancer sucked at first, and it’s still kind of affecting me. I’m getting back into shape because not being active for most of three to four months really messes with you,” stated Rodenbeck.

Rodenbeck had played tennis since freshman year when his friend Cesar Ramirez got him to try tennis out. Freshman year was more of a learning curve, so he tried both doubles and singles and additionally did soccer for two years. So far the tennis season has been doing well as Rodenbeck and his doubles partner, Wyatt Theis beat the Division One Bayport number two doubles player which was a significant accomplishment.

“My family and Cesar [Ramirez] have been my biggest motivators by helping me to look at things in a better perspective. They also push me to workout and eat healthier,” explained Rodenbeck.

The boys usually listen to music on the bus before to get as hyped as possible. Rodenbeck described what one could to get better at tennis, saying it takes a lot of practice and time. Even if it seems like there is no progress, just keep to it and try different things.

“Overall, I think the team is going to do awesome in the conference this season. If we can do better than last season I know we will achieve that. I need to work on consistency in my returns by just putting in the time and practice. I could never stop playing tennis, and I will whenever I have the time,” stated Rodenbeck.

The team has put in a lot of time and effort into practices and matches. Each individual has something to work on, but the boys have high hopes for a good season. Many of the boys have come close in events so far and are each showing potential for this season.

Rodenbeck explained the struggle of his senior year by stating, “The way I have been looking at it is that my condition has already taken a better part of my senior year and made me miss out on a lot of things. I’m working really hard to make sure I don’t miss out on any more than I have to. Therefore, if people want to look at me as an inspiration they could.”