Preparation for Game of Tiaras 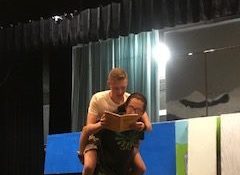 The Shawano Community High School students that are participating in the fall play, Game of Tiaras, have begun the preparation and practices. The play is a mix of tragedy and comedy with a little mix of pop culture.

Director Alex Konen, who has helped with the plays for six years, started the process towards the beginning of August with the choosing of the play. 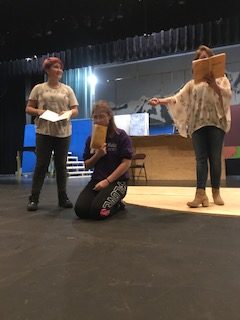 “First, I need to find a script, which means I order multiple different copies of things and read all of them until I find one that I think ‘Wow this is the play that I want to do’. I usually have a style or genre that I am already thinking of,” Mr. Konen explained.

The next step of the process is thinking of how he wants the stage to look including costumes and set with the help of parents and teachers from the school. After that it continues on to the auditions for the students that want to be in the play.

“The casting process for the show is an audition process in which I hold two days of auditions that if a student would want to be in the play they would show up, read a monologue, fill out a form and give them a schedule and a contract,” Mr. Konen explained. 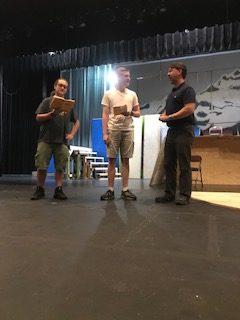 The process can either be knowing where the right person goes or having to call people back for more information. When the process is done then practices can begin.

Junior Megan Herrmann, who has been in twelve plays, said, “I play Belle from Beauty and the Beast, and I love being able to play a character that I actually know and love.”

Not only does the play allow the students get to know and love their character, but it also allows them to get closer with others.

Senior CJ Henning, who has been a tech for many plays and acted in two, explained, “The people are the best part of practices. The connections you make with friends, the new people you meet and how you connect with each other on stage and off stage builds really strong relationships.”