Hawks give Seymour the thunder 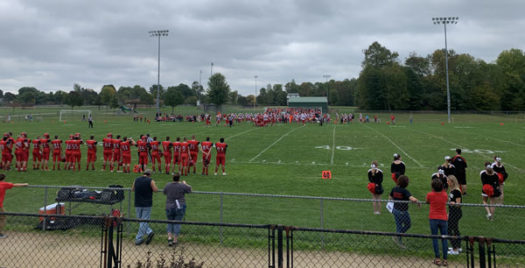 On Saturday, September 21 the Shawano Community High School Varsity Football team competed against the Seymour Thunder for their annual homecoming game.  The Hawks were able to come away with a win to kick off the homecoming festivities for the day with a score of 36-7.

The players on the football team had been practicing tirelessly to win the famous homecoming game.

For this particular game, quarterback, junior Gage Timm explained that both offense and defense worked well together and put their best foot forward.  However, it was hard to mentally prepare for the game.

“We had to try and get rid of all of the homecoming distractions,” Timm explained.  “At practice we had to really be into it and get all of the other stuff out of our heads during the game.”

Since the football game is one of the main events that happens during homecoming week, it was a very important win for the team.  Seymour is always a solid team that competes hard for a win every game, so this game had more challenges for the Hawks.

“Seymour is normally a very physical team, mentally strong.  They normally don’t crack like they did,” Timm said.

This game was not only for fun, but it also helped determine who and where the Hawks play in the future.  Although one of the main purposes for the game is to celebrate the fall sports and everyone returning to school, it was a very pressing game.

“It’s a really important game because now we’re three and two, so now we only need one more win to get to the playoffs,” Timm said.

One of the many activities that happens throughout the game is the cheer team performing to add to the atmosphere.  Junior Haley Sheldon is one of the members of the team that thinks that the cheer team is essential for a football game.

The cheer team encouraging the spectators to get involved.

“I think cheer is important because we really get the crowd engaged,” Sheldon said.  “We get them to cheer for their team, and we get them excited about what is happening.”

Another important aspect of the football game is the pep band.  The band has logged several hours practicing to make sure that the official performance went well.

Along with playing during the game to add to the mood, they also performed a halftime show with the Color Guard.  Junior Courtney Parker is one of the band members that helped add to the performance.

Parker believes that the band has a big impact on the game and the overall environment. “I think it ups the spirit and really makes it a lot of fun and really cool there.”

The band has been practicing extra hard to perfect their performance in time for the halftime show.  In addition to the performance, the band also marched in the homecoming parade the Friday before, and attended a band camp where they had extra practice.

“Band camp is just a week of learning the show and getting to know the freshmen and their classes,” Parker explained.  Throughout the craziness of the past week, there are things that students could do outside of school to prepare, like “practice the show and attend the band camp so they get to know the show before they can perform in it.”

Good luck to the football team as they attempt to make their way to the playoffs, as well as the cheer team and band as they continue to support their school’s athletics.