SCHS busts down at homecoming 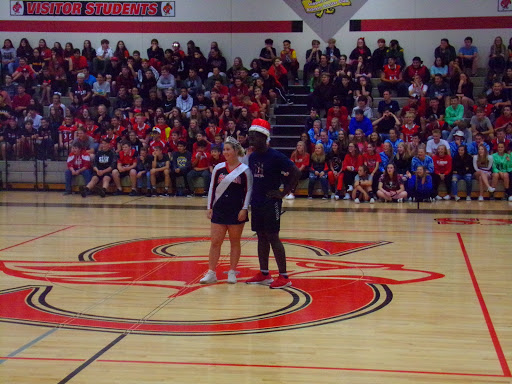 Shawano Community High School hosted their annual homecoming dance at 8 p.m. on Saturday, September 21. Additionally, Friday’s homecoming activities were lengthened to an all day experience; therefore, the rep games were shortened. Another addition to Friday was an in-school parade where the reps, band and floats marched past Olga Brenner and the Middle School.

The homecoming reps were seniors Chloe Krueger (for Cheer), Chris Etori (for Soccer), Katelyn Wiber and Nick Wehmeyer (for Volleyball), Brayden Dickelman and Brianna Mott (for Football), juniors Macy Monfils and Nolan Buck (for Swim), seniors Isabella Buettner and Ben Carroll (for Tennis) and myself accompanied by Nick Sherman (for Golf).

Wilber described her favorite part of homecoming by stating, “I felt really honored as well as excited when my teammates nominated me! My favorite part of Friday was trying to do the handshake, even though we messed it up, and the parade! That is why I chose Nick to rep with because he and I are good enough friends where we would have a naturally good time and have fun together.” 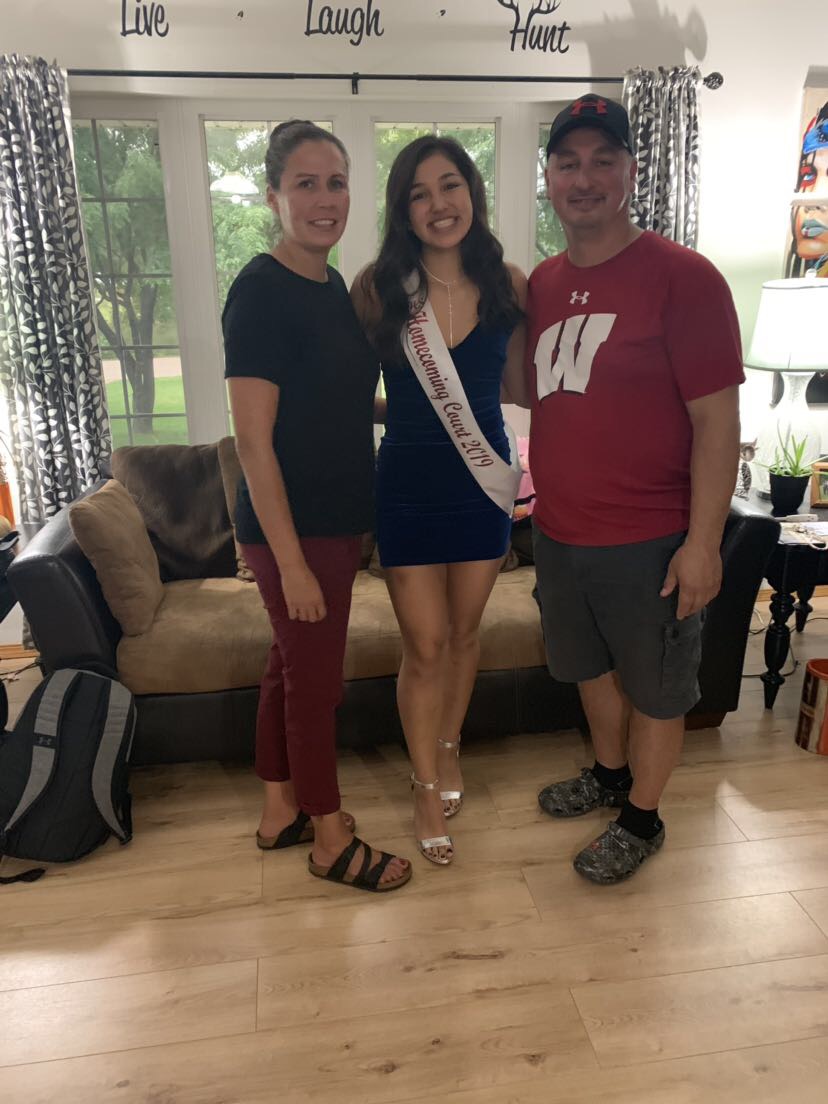 Wilber and her parents. Photograph courtesy of Katelyn Wilber.

The reps played a game where the boy and the girl had to alternate racing across the gym in a cardboard “car” to retrieve a puzzle piece. Each time the reps had to change shirts and complete the puzzle. After everyone finished the game the homecoming king and queen were announced, which were Shawano’s Cheer and Soccer rep’s Krueger and Etori! 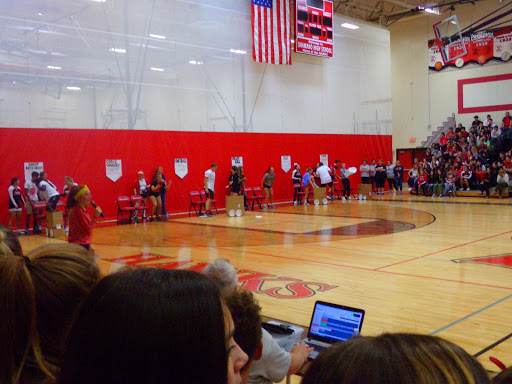 All the reps participating in the game. Photograph courtesy of Caprice Rush.

“I wasn’t really surprised that I won because people were giving me side smiles and telling me they voted for me. Even though it wasn’t a big surprise, I was really happy. I was tired of seeing football win every year so this time I wanted it to be different. It made my coach happy that soccer won because it has been 6 or 7 years since, and I brought it back,” said Etori.

Etori and Krueger with their homecoming group.

As seniors, Wilber and Krueger both agree that homecoming is bittersweet and almost surreal, but they are excited to start a new chapter in their lives. 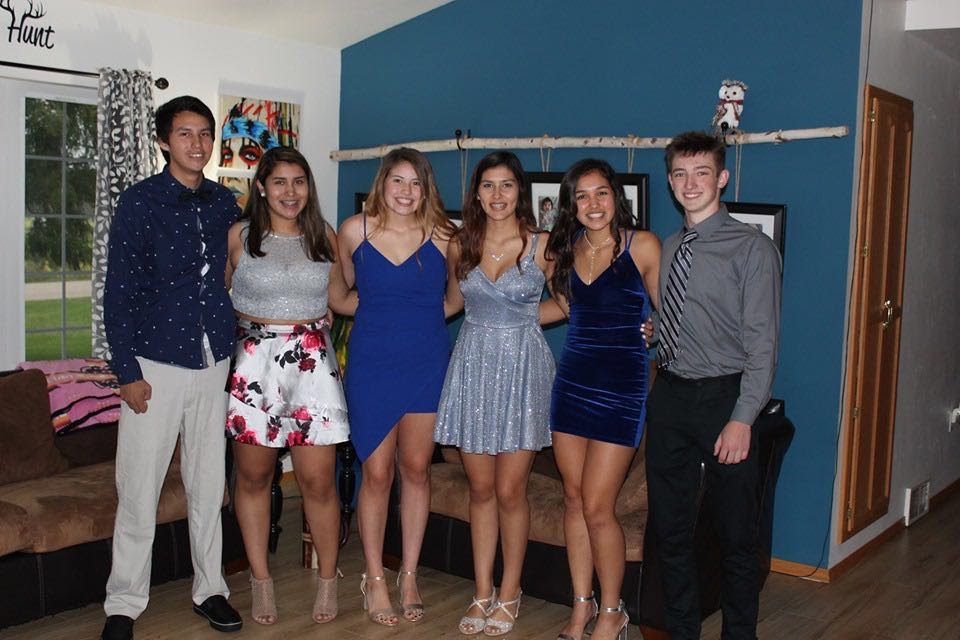 Wilber and her homecoming group. Photograph courtesy of Katelyn Wilber.

Krueger expressed her homecoming experience by stating, “It was surprising. I was not expecting to win queen, but it also brought me joy to know that people valued who I was enough to vote for me. I believe that I have gotten enough of the rep experience, and I wouldn’t want to take that opportunity away from someone else; therefore, I probably would not rep for Winter Wonderland. Although it was fun, I would like someone else to feel special as well. That would make me the happiest.”

This year’s homecoming was definitely one for the books. Although, there is still a lot of tradition that comes with the school function that students look forward to every year. For freshmen it is a new and exciting experience that they will enjoy for years to come.

Freshman Allie Brown described her first ever homecoming experience by stating, “I thought it was fun to have an all day homecoming, but less checkups with enhancement I feel would be better. On Saturday I went over to a friend’s house [Riley Dreier] for pictures and dinner, then I straightened my hair and put on makeup for the dance. I was inspired to rep for swim at some point in my high school career because I think it would be a really fun experience.” 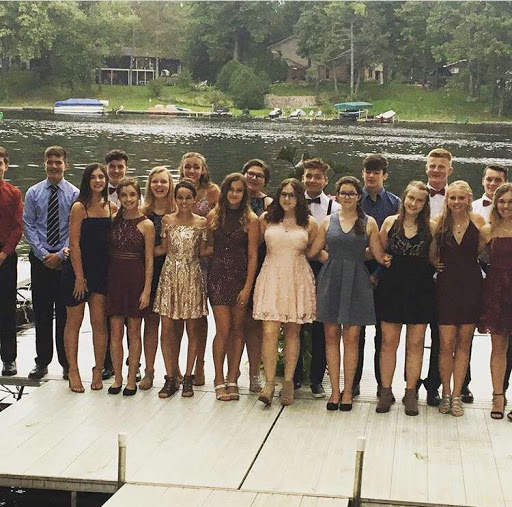 Brown and her homecoming group. Photograph courtesy of Allie Brown.