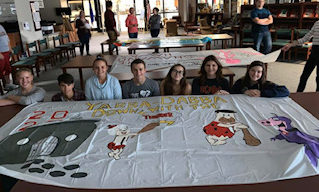 Shawano Community High School held window painting in the commons on September 13 as part of homecoming activities. Each class was supposed to create a painting on a plastic tablecloth that went with the theme of classic cartoons this year. The seniors picked The Flintstones, the juniors selected Arthur, the sophomores chose The Pink Panther and the freshmen decided on Spongebob.

Senior Lucas Gast explained, “The officers of our class had the idea already picked out, and they told us how they wanted it to be made. We included important characters and items from the show, but we also included a touch of Shawano.”

Some of the teachers from the school volunteered their time to help watch and judge the paintings. Each class would then be judged by the teachers, and they would earn points towards winning homecoming. They all had things that they needed to look out for in the paintings at the end.

Math teacher Ms. Alicia Pinchart explained, “Our criteria were neatness, creativity, the use of school colors and the theme. A lot of it was how they tied it back to classic cartoons, and if they used the Shawano Hawks colors.”

It was a struggle for some of the classes to get their painting done because there were either too many people, no people at all or not enough time to get everything finished.

“The hardest part of window painting for the junior class was getting it done on time with limited people. At first we started out with about eight people and then it went down to only four,” said junior Michael Dickmann. “I wish we could change the wording on the top because it was all sloppy, and we did not have enough time.”

Window painting allowed the students to get creative during their homecoming week. It also let some teachers think of some ideas if they were allowed to paint.

Ms. Pinchart explained, “I guess when I think of a classic cartoon, I think of things like when I watched when I was growing up. I think The Rugrats would have been pretty cool to incorporate into window painting.”