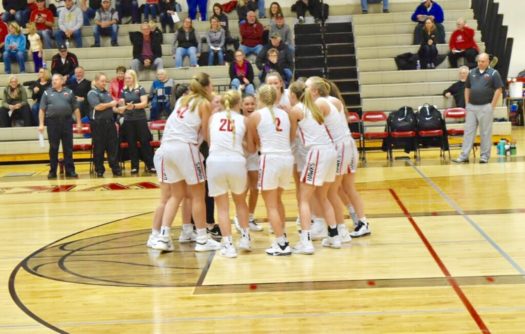 The players have been working hard to get ready for each of the games this season.

Junior Sophie Hanauer, who has played since third grade, commented, “Our two coaches watch a lot of game film, and they give us a really good game plan to go off of. In the practices before the game, we go through all of that. We make sure that we understand how the other team works, and how it affects our play.”

Some of the players have their own goals for what they want the season to look like for the team.

Junior Lydia Beyer, who has played since third grade, said, “Hopefully, we finish in the top three for conference. We were ranked really bad this year, and that affected us because we thought we should have ranked higher due to last year.”

The players have had their own challenges that they have worked on in past years, and some are hoping to improve more for this season.

Junior Rory Johnson, who has played since fourth grade, explained, “My biggest challenge was working from behind because I was never really the best basketball player. I didn’t put as much time in as everybody else, but I’ve been working on what I am good at which is defense. I want to work on my offense, and I want to be more of a scorer for the team.”

The boys and girls both have their own rituals before any games to get them ready.

“My rituals are before any home games, I have to go to Subway. I always have my hair braided for game day,” Beyer said. “I keep myself motivated because I am not the only one out there, so I need to continue to play good for my team.”

When playing on the team, the players start to become a family. Some of the younger players feel inspired and play better due to the older players.

Johnson commented, “I like to base myself off of [seniors] Nick Sherman and Brayden Dickelman because they play hard all the time, and they have attributes that I would like to have as well.”

The love of the sport has made it easier for some of the players to have fun in the games and at practices.

Beyer commented, “This year, I love the team because it’s like a family. I enjoy going to practice every day. The game against Merrill was my favorite because we did not know how we would be or how we would match up. Last year, we lost by one to Merrill, so winning this year meant a lot.”

The players have their own advice for their future self at the end of this basketball season.

Hanauer explained, “I came off of an injury last year, so I had to really work hard to get back to where I wanted to be this year. I want to remember to take things slowly and understand that I had to work for my role.”

As the season has just begun, both of the teams have been working hard and will continue to. Keep up the hard work!