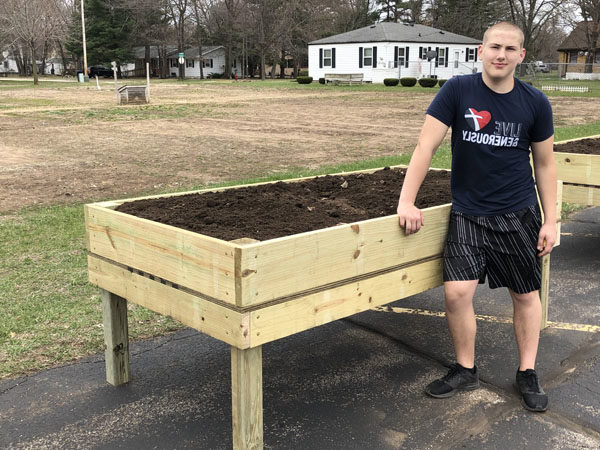 Over several years, students who have participated in Boy Scouts needed to complete a large service project, in order to advance to an Eagle Scout.  These boys get to select a project to enhance their community, while also allowing them to qualify to get the title of Eagle Scout.

Sophomores Jackson Smits are Liam Krueger some of the members that received the honor of becoming an Eagle Scout. Sophomore Jack Reed is currently working toward achieving the rank of Eagle Scout.

“My dad works on the Menominee Reservation as a diabetes educator, so he has a lot of connections up there.  He wanted to help people get healthier there, so he found a program where they build garden beds,” Krueger said.  “They place them all around the Reservation, so people can get outdoors, get physical activity and grow their vegetables to eat healthy.”

Smits also incorporated gardening into his project.  However, his took place at the Shawano community garden.

“I created three raised garden beds for the community garden at Zion Church, so that the elderly who can’t walk on uneven surface and people that can’t bend over can pull their cars right up to it to garden,” Smits said.  “My brother moved and refurbished the shed right next to it, so our Eagle Scout projects are right next to each other, and that’s cool. We already had ins with the lady, and she reached out to our troop for anyone who was ready for an Eagle Scout project at the time.”

Finally, Reed ventured from the gardening and decided to acknowledge those in the community for their service in the military.

“I am making a monument for the Purple Heart recipients of Shawano County past, present and future,” Reed stated.  “I didn’t know what to do for this project exactly, and a Purple Heart recipient reached out to me and said he had seen one of these monuments once, and he thought it would be a really good idea for the project.”

Becoming an Eagle Scout takes a lot more work than just the projects that can be seen around the community.  These members have been through years of training, volunteering and learning.

“ I learned how to operate all of the machines [used for his project], but I’ve also learned what kind of difference I can make as a person,” Krueger explained.  “Even combined with my friends, we spend our time doing stuff that may entertain you and other stuff for school, but you can spend time doing things that make a difference in other people’s lives.”

Although these students are doing tremendous things in their community, there is usually little knowledge about these projects in the school.  However, recognition is not their goal, and their work does not go unnoticed.

“The people that use it don’t know who I am, and I don’t know who they are, but when I drive past and I see people working there, they know that it was us doing it,” Smits said.  “It’s not always about ‘oh it’s that Smits boy, or it’s that Krueger boy,’ it’s the troop that matters. It’s us as a whole. They say, ‘oh, it’s those Boy Scouts,’ and that’s what matters”