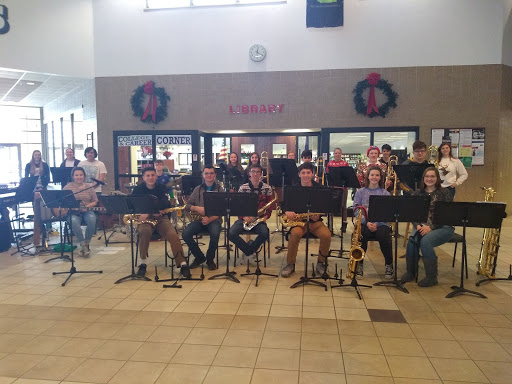 Christmas is an exciting time at Shawano Community High School. SCHS hosted live music in the cafeteria with a Jazz band performance. There were also candy cane sales, 3 dress up days and a visit from Santa Claus.

The candy cane sales were December 15-18 where SCHS students could buy candy canes for a dollar and attach a friendly note. The Student Council was in charge of this amazing event. There were 175 candy grams sold during this event, and all the money goes to help programs in student services.

The candy grams are a fun tradition that has been passed through each generation in their high school experience. The candy grams have a special meaning to everyone.

Mrs. Alexander stated, “ It reminds me of candy gram sales we did in school and also the candy grams in Mean Girls.  It is an easy fundraiser.”

The dress up days were on December 18-20. The first dress-up day was  Polar Express day. SCHS students brought the feeling of the movie to life by wearing pajamas.

Sophomore Alexis Christopherson explained what her favorite part of Pajama day was by stating, “Well, seeing everyone else in pajamas there were a lot more onesies than I thought there were going to be. I was scared because my friend did not wear his, and I wore mine.”

Color wars were also a great way to show the students’ hawk pride and bring in the season’s joy. Each grade had a different color. Seniors were red, juniors were green, sophomores were white and freshmen were blue.

Not only were there fun days like the color wars, there was also an ugly sweater day. The students could wear any kind of Christmas attire.

Jazz I also  performed on December 20 in the cafeteria. The students worked hard on the pieces they performed. It took three class periods to rehearse the pieces.

Director Christopher Kent at SCHS gave insight into the jazz bands and what his favorite part of the fun event brings.

“My favorite part is that I think it brings more of festive spirit to the last day, before we leave for break and gives more of a Christmas spirit for all the kids,” Mr. Kent stated.

Junior Preston McKinnies, a jazz band student, explained what he enjoyed most about jazz band by stating, “I think playing in the cafeteria is really fun. It will be my second year doing it. I watched it my freshman year, and it is just a fun time for the jazz band to get together and play in front of the school and in front of their peers.”

Will Myers, a junior a jazz band student at SCHS stated,”It’s kind of fun playing in the cafeteria, and it is fun to pick out the pieces that are going to be played.”

With an exciting week at SCHS, the perfect way to close a fun-filled week was a visit from Santa Claus. The students took photos with jolly old Saint Nick and got a candy cane at the end of the visit.

The holiday spirit from students and staff made the week very warm and inviting to all.