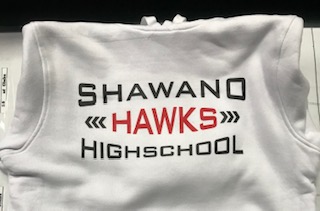 ▲
The sweatshirt that was being sold.

▲
The sweatshirt that was being sold.

Small Business Development class at Shawano Community High School designed a sweatshirt to sell to the faculty and students at the school. The class was selling them after November 21, and there is a limited amount of sweatshirts left to be sold.

Business teacher Mrs. Katie Beres has assigned this project to her classes for the past couple years. The project is intended to help them with learning how to run a small business.

Mrs. Beres explained the intentions of the project by stating, “Our Small Business Development project helps students learn all aspects of running a small business from sales, marketing and finances. It’s really the best way to do something by doing it hands on.”

The class determined an item that they believed that the student body would like to buy. The students then decided how they were going to create their sweatshirt.

The class decided on going through local business Bolin’s Speedy T’s to make their sweatshirts.

Mrs. Beres commented, “They [Bolin’s Speedy T’s] do such a great job with their products. We would be supporting a local business [that gives] back to the community. Like when they gave t-shirts to people that were coming to a football game this year. We like to support business that support the school as well.”

The sweatshirt is white with a logo that says Shawano High School with “Hawks” in the middle of it. The students in the class decided on what they wanted the sweatshirt to look like, but they wanted more feedback so they sent out surveys to the Business & Marketing classes.

Krolow explained her favorite part of the sweatshirt by stating, “I like how the sweatshirt is different from all my other sweatshirts. I don’t have a white sweatshirt, so it gives me that option to have them.”

With all products that are being sold to the public, there were some changes to what the sweatshirt was originally made to be.

Krolow explained, “This was also the second design we picked, but the other design didn’t really work on a white sweatshirt, and it was two dollars more expensive. I like the other colors and design, but I like the outcome of the sweatshirt.”

Mrs. Beres explained, “We did not make any profit on these; we sold them for cost. We were actually selling below cost before Christmas, so we could give students the opportunity to get gifts or some really nice quality sweatshirts.”

Krolow commented, “The sweatshirts are something that we’re only going to have this year, and it was not going to go on forever. Another good thing about this sweatshirt is not a lot of people have white sweatshirts, and we do have white-outs at games.”