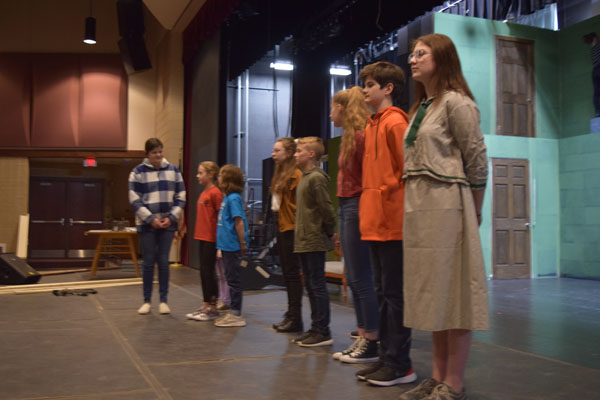 Every year, the theater students at Shawano Community High School devote several months of their busy lives to prepare for the winter musical. Whether it be the actors on stage, techs backstage, or the musicians in the pit, many students work hard to accomplish one goal: put on an entertaining show.

The 2020 winter musical is none other than The Sound of Music, a classic by Rodgers and Hammerstein. The musical is based off of Maria von Trapp’s memoir of the Trapp family singers.

Cast as the lead male, Captain von Trapp, is sophomore Riley Siegfried. This will be Riley’s third show. He is best known for his role of Prince Eric in last year’s production of The Little Mermaid.

“My favorite part about the musical is the music. I love the music. The music is great; the cast is great,” stated Siegfried.

The high school kids take on adult roles, but The Sound of Music requires many roles for younger kids. Most of the von Trapp children are played by younger kids in the community, but junior Megan Herrmann plays the 16-year-old von Trapp child, Liesl.

“I mainly auditioned because Sound of Music has always been one of my favorite musicals, and I have always loved the part of Liesl,” Herrmann said. “Now since I am her exact age, I basically relate to her so much because I’m the same age and kind of have a similar family, just not as big.”

Because the production is so large, the cast and crew spent many long hours together. Since they all have so much in common, it is only natural that everyone involved has formed close bonds.

“Theater is just a great experience to get outside of your box and make friends. Once you’ve made friends, you get to hang out with them all the time!” said Siegfried